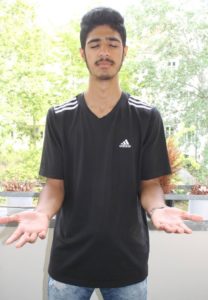 You may remember that some months ago I asked readers to let me know if they had an old laptop in the cellar they had forgotten about. I got a quick response from Thorsten who works for our housing association. He is also a computer teacher, choir leader and organist. Makes you wonder what multi-talent means! 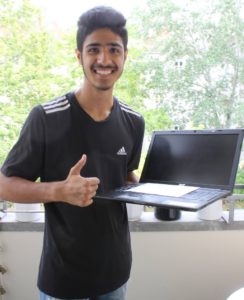 He prepared one given by an association member and this was given to Bro1. I posted photos of him holding out his hands and then opening his eyes to find a laptop in his hands, Nice photos and a very useful present for he now uses it each day in his studies at college. Interesting that a lot of information and homework is now posted on-line.

Yesterday it was time for Bro2 to give a big smile. They arrived as planned to do homework. Bro2 has realised he needs to improve his English and not only grammar. They don’t speak in his English classes so he now wants to do that with me. After they had settled in, I told Bro2 to go onto the balcony and close his eyes while holding out his hands.

Bro1 smiled for he knew what was about to happen. Bro2 went onto the balcony and held out his hands. I dropped a laptop into them. He opened his eyes then gave a large smile. I told him it was for him. He smiled again. He then come over and gave me a big hug as he said thank you. Thanks also go to Thorsten for he found this one in a cellar as well.