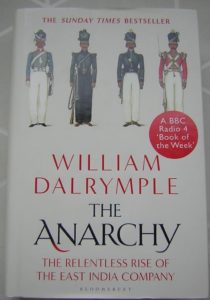 I got a nice surprise yesterday. I was about to jump under the shower when the doorbell rang. I pressed my speaker button and asked who it was. The answer was from a delivery man. He said, “A packet for you.” I pressed the button to allow access to the building and he gave me a packet and was gone in less than two minutes.

I stared at the packet and saw my name and address but no information about who had sent it. I opened it and saw a book, but still no information about the sender. It is a history of the East India Company in India. Then something in my brain went ‘bong’ and I realised it was from Ian who at the moment is living in Sydney.

How did I know it was him? Because we have links to India going back many years and it is the kind of topic he would find interesting and want to share with others. The author is a well known writer about Indian history.  He starts with details of the main players and I noted they were all men! He then gives a detailed introduction listing what the book is about – and what it is not about.

I noted that he was very critical of the EIC  and how it was able to take over a country with then over 200 million people. He is also critical about some of the main players such a Robert Clive, and he lists those who looted India and sent treasures to their houses in England. They are now museums and the public can see what they took out of India. Can’t wait to settle down for a longer read. Many thanks to you Ian.