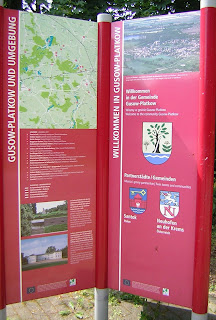 I had a really nice day out yesterday with two charming ladies. We met at Ostkreuz Bahnhof at 9.30 and took the train to Kostrzyn on the Polish border to the east of Berlin. The train was full and most people wore face masks. There were lots of people with bicycles for there are lots of popular bicycle routes  there. We got out at Müncheberg to take a bus north. The bus didn’t come so we called a taxi service and after one hour waiting we set off. 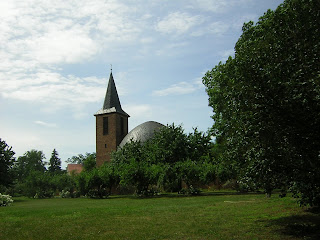 We got out at Kunersdorf. I had never been in these villages before. They are all part of the history of the area and what became Prussia – Preußen and are also important in the history of Poland.  In the village we found the Chamisso Museum. There you can see details of important writers, artists who lived and worked in the village. Next to the museum is a church. That was part of a major construction project which included a large ‘Schloss’. That was destroyed in 1945 but the museum, church and gardens are worth a visit. I wonder why I didn’t do that before!

We took the taxi again to the north until we reached Bad Freienwalde. There we waited for a local bus and took time to sip a nice drop of Chardenay. We got out at Strausburg Nord and took the S-Bahn back to Berlin. A really nice day and we decided to have another one like it soon.