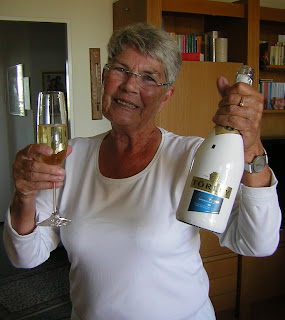 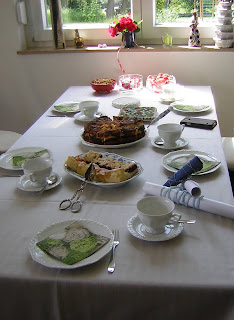 More eating – but his time it was ‘Kaffee und Kuchen’ yesterday afternoon. I met my Kowalke Gang and we took the S-Bahn to Mahlsdorf in the east of the city. It is a nice suburb with lots of family houses and greenery. We walked for nearly 10 minutes then came to our destination. A flat which is the home of another of the Ko Gang. She has a talent for gardening and a really nice garden with a large range of flowers.

We exchanged greetings for it was her 80th birthday, but she looks much younger. We then sipped a relaxing glass of cool sekt to wish her lots of good health. Over cakes and coffee there was lots of talk, particularly about events in the past. No surprise about that. We moved into the garden and sat under a large umbrella. We were lucky to be celebrating on a warm sunny day.

Family members arrived later and so started a second round of eating and drinking. At that point I left the celebrations and returned home feeling very happy for being able to share such a special afternoon.