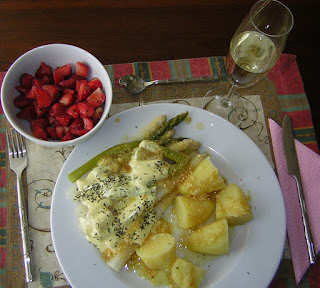 I’ve had a mixed week including three hospital visits. It started on Monday with a visit from Birgit F. who I hadn’t seen for too long. She looked great as we sipped a cool G&T and caught up on news. We decided to meet more often and not only just to enjoy a G&T. On Tuesday I went to an institute at my local hospital. I had to show a Dr. the X-Rays I had got the week before from a specialist Radiologie centre. He decided I had to come to the hospital again on Thursday for treatment. 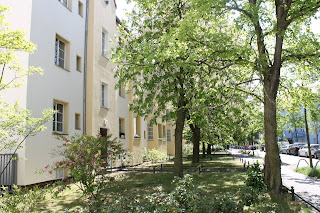 Before then, I met Marita on Wednesday. I hadn’t seen her since Christmas even though she lives opposite to my place. She is very busy at the moment with her mother who is aged and ill. Marita decided to cook a traditional meal of Asparagus, which is called der Spargel in German. It was delicious as you can see from the photo. She prepared it with strawberries and black pepper. She said that was also traditional. It was very tasty. We decided to meet more often and even in my garden when the sun shone. 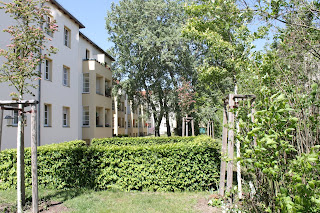 On Thursday I was back at the hospital and had to remove my lower clothes except for my underpants. I had to lie flat and the Dr gave me two injections just above my left bottom cheek. I believe they were stronger than the ones I had earlier got. On Friday – this morning – I had to go back so the nurse could check on the wound and if it was okay. It was and I got new bandages and was told I could remove them tomorrow. I got home in time to relax and have breakfast before Johanna arrived. She read all my medical reports and explained some points to me. It is easy for her because she used to be a nurse and she can translate medical German into normal German! We then went for a relaxing walk in a local park area.

Talking of park and green areas, I told you in an earlier post that I walk in the big garden at the back of the flats where I live. I am fortunate to be able to do that compared to millions of people who live in small rooms with no access to greenery. Here is a photo of the front of the flats. You can see that we have a small one-way road in front. The other photo is of the garden at the back of the flats. It also has play areas for children and seats/tables for picnics and grill evenings. I just walk in it!