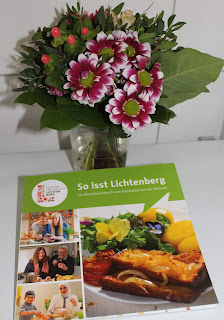 On Wednesday I went to a local community centre to meet members of my SPD district. It was our AGM or ‘Wahlversammlung’, They always last a long time. This started at 7.00 pm and ended at 11.00 pm! I stepped down from the Committee and received these nice flowers and a book about what local people from different cultures eat. A very nice present! I helped with vote counting and was very pleased to see many new and young members voted onto different positions.

Thursday 13th February was the 75th anniversary of the bombing of Dresden. There were 4 raids between 13th and 15th February 1945. 722 heavy bombers of the British RAF and 527 from the USAAF dropped more than 3,900 tons of high explosive bombs and incendiary devices on the city. The centre was destroyed and an estimated 25,000 people killed. Most were civilians and the bombing remains controversial even to today. My parents told me about this when I was still a child. They believed the bombing was not necessary to end the war. Others had/have a different view.

Friday 14th February. Yes, it’s Valentine’s Day. I hope you bought your ‘better half’ something nice. Just imagine how many millions of people have kissed each other today! I did that yesterday for this morning I went training with Kerstin’s Oldies, then had a haircut and went shopping. I’m meeting another nice lady tomorrow morning so I know I shall get a BIG kiss – and enjoy it as always 🙂