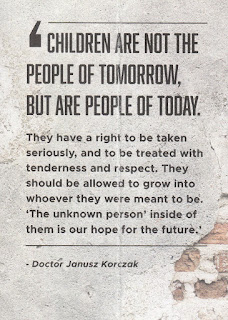 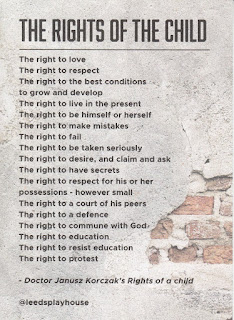 Just read the words on the card headed ‘ The Rights of the Child’ and the other card. Your heart will melt! Mine did. I got them from Alan and Lynne. They came with a programme from Leeds Playhouse about a production they had seen called, ‘Dr. Korczak’s Example’.

Janusz Korczak was a writer, doctor, storyteller and broadcaster. He was a Polish Jew who ran an orphanage in Warsaw. When the Nazis invaded he and the Jewish Children were put into the ghetto, where he continued to treat the children with respect and dignity. James Brining the Artistic Director of the Playhouse commissioned a play about his life. That is what they saw and Alan wrote that it was all connected with memories of Auschwitz.

Hope you are having a happy and positive week. Today we had sun and blue skies but it was still cold. I’m meeting Johanna tomorrow, then Kaffee und Kuchen with some friends and a meeting in the evening for a beer. Read those words again and think about the person who wrote them.