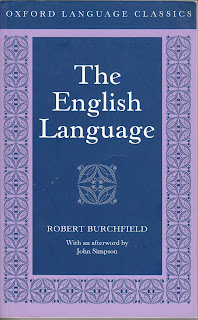 I’ve had a mixed week. Visits included to a new family of refugees, to the hospital to have my hands x-rayed, meeting with the Kowalke Gang for a long lazy lunch on Thursday, training with Kerstin on Friday morning as usual and to visit a special SPD event on Friday evening. Between these and things like shopping for food, I opened another book.

It is amazing. It is called The English Language and written in 1985 by Robert Burchfield (1923-2004). He was born in New Zealand, fought in WW-1, returned to New Zealand and started an academic career. He won a scholarship to Oxford University then edited the Oxford English Dictionary for 30 years.

He also wrote and edited many books. He has complete knowledge of the language in showing how English developed and emerged from contact with many other languages. He also makes clear distinctions between regional dialects and the emergence of written English and spelling.

I recently received an invitation to the Jahresampfang 2020 (annual reception) of the SPD Lichtenberg. This is the district I share with about 270,000 people! It was not the first time I had received such an invitation. As usual it was held im Festsaal (the festival hall) of a local hospital. The hall was packed with members and guests.

Two members received honorary prizes for their work in the community. One was a retired music teacher and he quickly got the members to join him in a song. This was followed by a large buffet with drinks. I met many people I had not seen for a year or more and really enjoyed the evening.