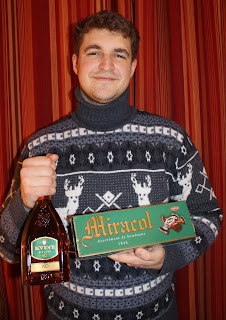 The day started by going to the gym-training centre where I go each Friday morning to enjoy being with Kerstin and her Oldie Training Gang. We were joined by members of her Wednesday Oldie Gang. We started by raising a glass of sparkling wine at 12 noon to toast each other and to wish all good health and more training in the new year.

The tables were full of food in addition to more sekt bottles. Lots of talking as each tucked into the range of home made traditional dishes. Mmmmh..very tasty! I had to leave at 3.00 pm for another meeting so I said my goodbyes and set off to Lichtenburg by tram and U-Bahn. 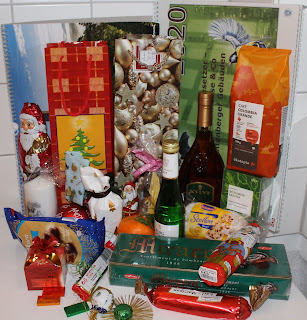 I arrived at the Lichtenburg Museum a little late but in time to hear the welcome speech by the Director. Then it was time to tuck into afternoon coffee and cakes followed by a range of traditional snacks and drinks including local beers. I chatted with a couple of people I know before I had to put on my coat and head for the bus to take me home.

When I arrived I found Daniel waiting in the entrance. We had arranged to meet but he arrived early. No problem. I made tea and sliced some Stollen Cake as we caught up on news. His studies at the University are going well and he only spoke English with me – and with no mistakes! This morning at 8.00 am he got onto a plane in Berlin and flew to Moldova. Two hours flight to the capital city.

He is spending a couple of weeks with his grandparents and plans to just relax and switch into his first language! He will also be spending some time with his girlfriend. I hope they have a wonderful time with each other for they deserve it. He brought me some presents. Both the bonbons and liquor come from Moldova. What a nice surprise!

I’m going to share them with my Kowalke Gang when we meet on the 24th December. Everything tastes better when you share with such nice people 🙂 Here is a photo of presents I got earlier in the week!