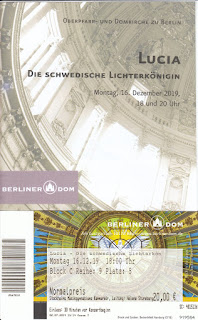 On Monday I went to Berlin Cathedral (Dom) for a concert. Most of my Kowalke Gang were there with friends so there were 12 people. It was for me a very special concert. How many of you have been to a Swedish choir concert? I hadn’t so was looking forward to the event. We got tickets for seats in the 9th row so were fairly close to the choir. Nearly every seat was taken.

The topic was ‘Lucia – The Swedish Queen of Lights’ and given by Stockholms Musikgymnasiums Kammerkör conducted by Helene Stureborg. There were no musical instruments – only the choir made up of young musical talented people.

It was interesting to listen to how they moved through many ranges of music and volume with such confidence. They also sang in Swedish, German and English. If you get the chance then go to see/listen to them.

On Tuesday afternoon I went to the Christmas Party given by my SPD Oldies. A mixture of speeches, comments, jokes, food, coffee and sparkling wine. A very entertaining few hours and a nice way to relax and end the day.