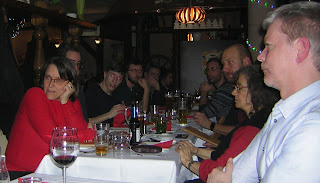 Last Wednesday evening, as the Brits were preparing to vote, I went to my local SPD meeting. It was held in an Italian restaurant in our local shopping centre. There was no official business for we had gathered for a Christmas party.

In this photo you can see about half of the members in attendance. Lots of political talk including a number of comments about the UK election and Brexit. There have recently been some changes at the top of the SPD, so there were lots of comments about that. 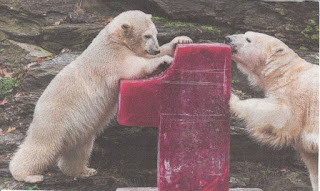 A few days before then, Hertha had her first birthday. I can hear you asking who Hertha is. She is a bear. Here you can see here trying to bite into a large fruit ice, and being helped by her mother on the right of the photo.

They live in Tierpark which is a zoo opposite the shopping centre and restaurant where I met the local SPD members. She is the biggest attraction in the zoo, particularly for families with young children. They love to visit and wave at her.

Guess who is coming to visit tomorrow … Yes, Imre! He called and suggested we meet for lunch at the local Czech restaurant. He likes it. I wonder how much of my food he will eat?