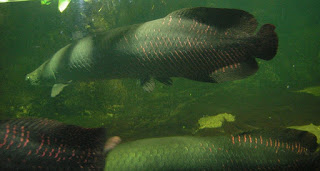 It is 25 years since I co-founded ELTAB = English Language Teachers’ Association, Berlin-Brandenburg. Kristie D. brought the idea to Berlin from Frankfurt-am-Main where she lived, taught English and was active in the local teachers’ association. A small group of teachers met her in my flat to talk about starting an association in Berlin and Brandenburg. That was at the end of 1993. In early 1994 we had completed all the paper-work with lawyers to set up the organisation. 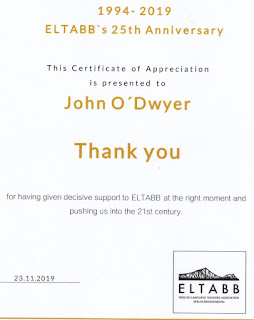 Many new and old members met yesterday evening to celebrate 25 years. The meeting was in Berlin Aquarium, on Budapester Strasse near to railways station Zoologischer Garten. The current president is called Sarah Brown and she really is a talented person. I hope she stands for office again next year. I had never been to this Aquarium before. It is part of the complex making up Berlin Zoo in the west of the city and not to be confused with Tierpark in the east which is not far from where I live.

I wandered around the Aquarium and was amazed to see many kinds of fish staring at me as I slowly walked by. There were also other kinds of sea creatures but I kept staring at the fish. Here is a photo of three fish. They are very large and I was surprised to see they had almost no tail. We had a tasty vegetarian buffet and drinks for a modest price. There were also some speeches and word games. What else when you have language teachers together?  I was then thanked for my work and presented with a certificate.

I’m very proud of this and that we started ELTABB for it has given so many people opportunities for them to explore their skills and abilities apart from teaching English. I plan to attend the ELTABB Stammtisch on Saturday 7th December, in the Altstadt in Spandau from 6.00 pm. I hope to take my ‘Family’ with me so they can learn a little more about German culture and enjoy the food and drinks on offer. See you there if you are in Berlin!