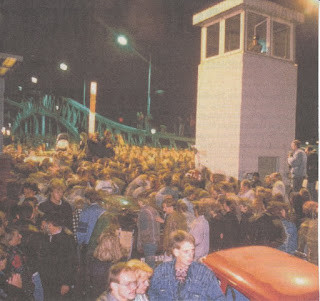 There are celebrations all over Germany today to mark 30 years since ‘The Fall of the Berlin Wall’. Actually it did not fall. Border guards allowed people from the east to cross believing permission came from the High Command of the East German government. A misunderstanding, but the wall eventually came down, and German reunification came a year later = 1990.

The German President, Frank-Walter Steinmeier, gave a speech at the Berlin Wall Memorial in Bernauer Strasse (where it was breached) in Berlin this afternoon.

Chancellor Angela Merkel was there as were the heads of state from Poland, Hungary, Slovakia and the Czech Republic. He urged people to “fight for a peaceful and united Europe”. I wonder how many Brexiters would agree!

There are lots of meetings, parades, parties and concerts taking place all over the country. There will be a big concert at Brandenburg Gate this evening. I shall be in the Philharmonie enjoying a concert. UPDATE: Sinfonie Orchester Berlin. Haydn – Symphony Nr. 93 / Mozart – Concert for three pianos / Beethoven – Egmont Overture op.84 followed by Symphony Nr. 5 op,67.