As you know I often go to classical music concerts, but usually one concert a weekend. This weekend it is two! Yesterday I met my Kowalke Gang and set off for the Philharmonie. There was a concert in the Chamber Music Hall, which is the smaller of the two halls in the building. It was almost full and most were over 60 🙂 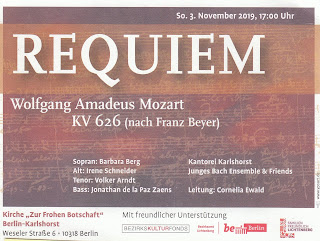 I was curious to know more about Arensky so did some hunting on the internet this morning. Arensky 1861 to 1906. He died of TB in St. Petersburg where his family had moved to when he was a boy. He studied music there and made a career as a ‘romantic’classical musician, a pianist and professor of music. He wrote a lot of music and I plan to listen to more.

In a couple of hours I shall walk all of 5 minutes to my local protestant church to meet the Kowalke Gang again. We shall then listen to a famous piece of music. Yes, Mozart’s Requiem. Looking forward to that. Hope you are enjoying your Sunday, with or without music!