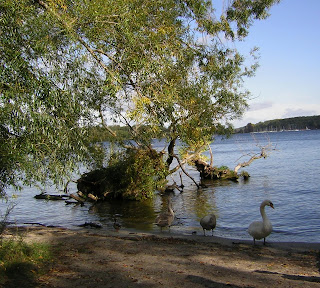 Yesterday was sunny, blue skies and 20°C. Ideal for a day out. I met Johanna and Putta at the local U-Station and headed for Alexander Platz. Another train and we got out at Berlin Wannsee station. We sipped a glass of something nice to get our legs into motion and then set out. Wannsee is in the southwest of Berlin and the westernmost locality of the city.

It has two lakes. Großer and Kleiner Wannsee located on the River Havel separated by the Wannsee Bridge. To the west is Glienicke Bridge which connects the area to Potsdam. Glienicke Palace and the Pfaueninsel are nearby. Wannsee lake is well known as the number-one bathing and recreational area for western Berlin. It has one of the longest beaches in the country and a popular nudist beach! 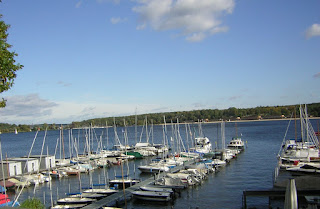 The area is linked to the House of Hohenzollern which provided the rulers as Elector of Brandenburg, King of Prussia and finally as Emperor of Germany. The area contains palaces they had built over many years. It contains the villa the painter Max Liebermann had built and is now a museum. There is also the Wannsee Villa where senior Nazi officials met in January 1942 to agree the ‘Final Solution’. It is now a memorial to victims.

On arrival at the lake we started our walk along the south side. We found lots of mushrooms and noted other people picking them. Later we stopped for a picnic on the side of the lake. Nice food and conversation before we set off to reach our next goal. At the end we took a local bus back to the station for the train back to Berlin. A very interesting day out with so many things to see.