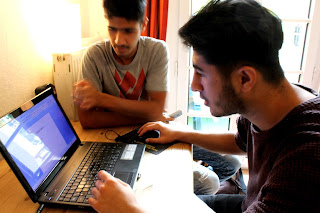 I recently had two visitors. Yes, ‘The Boyz’ arrived. Bro1 had earlier called to ask if he could use my laptop and printer. Of course I said yes. He had prepared an application letter with the help of his German teacher at school. It was for a 4 week training programme in mechanics and electronics. He did a similar course a year ago. This time it was for more advanced practice. I was impressed by the content of the application.

Meanwhile, Bro2 found another English course book and settled down to learn verbs and complete gap-fill exercises. I gave him two books when he last visited and he practices at home. I asked why he was so motivated to practice English. He said he had decided he wanted to study to be a pilot and realised he had to have good English. I smiled at this and just told him to keep practising.

When both had finished, they said they were hungry so we prepared some food and after that they settled down to watch a DVD. It was in English and a spy story with lots of action, which they like! Bro2 is 17 today and celebrating with his family. Happy Birthday to you, Bro2. He is now the tallest in the family and still growing!