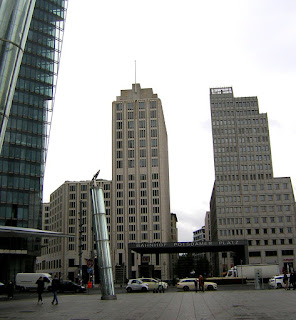 Yesterday I met some of my Kowalke Gang and we headed into town. We left the U-Bahn at Potsdamer Platz and met the guide for a conducted tour of the area. It was cold and windy. The guide had a large collection of photographs of how the Platz was and notes about the history of the area.

Here is some information I collected to give you a brief overview of the area.

Potsdamer Platz (Potsdam Square) is an important public square and traffic intersection in the centre of Berlin Germany, lying about 1 km (1,100 yd) south of the Brandenburg Gate and the Reichstag (German Parliament Building), and close to the southeast corner of the Tiergarten park. 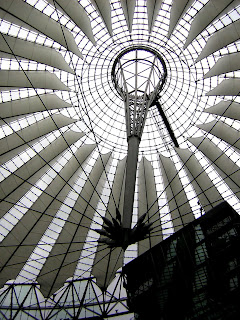 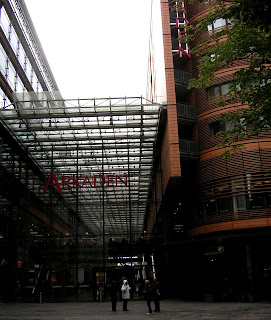 It is named after the city of Potsdam, some 25 km (16 mi) to the south west, and marks the point where the old road from Potsdam passed through the city wall of Berlin at the Potsdam Gate. Within little over a century it changed from an intersection of rural thoroughfares into a busy traffic intersection – including trains, buses and the U and S Bahn network.
The heyday of Potsdamer Platz was in the 1920s and 1930s. By this time it had developed into the busiest traffic center in all of Europe, and the heart of Berlin’s nightlife
It was totally destroyed during World War II starting with air raids in November 1943. It was left desolate during the Cold War era when the Berlin Wall bisected its former location. Since German reunification, Potsdamer Platz has been the site of major redevelopment projects.
The photo on the right shows the roof of the Sony Centre. This houses a cinema which I visit for it shows films in original language. The area attracts a lot of tourists and you only have to walk around the area to hear many languages. At the end of the tour, we went to a local fish restaurant. Guess what we ate? A very nice start to the weekend.