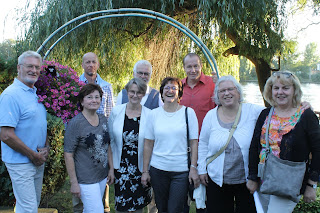 Yesterday was a special day. It started with going to an annual district SPD meeting. It started at 9.00 am with light refreshments and members greeting each other. The members had to discuss propositions for the state SPD programme submitted by the 5 sections making up the district party. 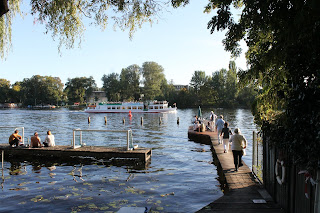 There was then a vote to accept each proposition – or not. Not easy to follow for they were spread over 78 pages! At least we could have a break for lunch, which was provided, before we went back to work. The sun shone in a clear blue sky as we continued our deliberations. 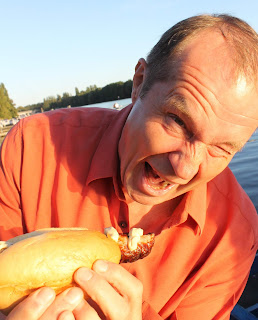 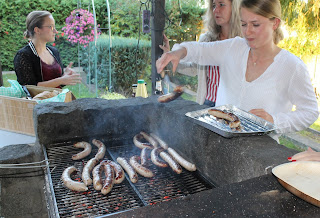 I returned home in time to change and pick up some presents for my next appointment. I jumped onto a tram and 30 minutes later got out at a stop near to the River Spree in Köpenick. A short walk and I arrived at the Schwimmclub Ostend. I joined other guests to celebrate the 25th wedding anniversary of Petra and Uli. Other members of my ‘Müggelseegang’ were there, as you can see in this photo. Uli and Petra are in the middle of the photo.

They and their daughters are members of the club and so could use the facility for a party. It started with a glass of sparkling wine when I arrived, which was later topped up. Lots of talking, jokes and laughter. What a wonderful atmosphere! There was a range of cakes and snacks with coffee before the grill was turned on.

Grilling sausages is very much part of German culture no matter which part of the country you are in. Falk is from one of the German states called Thuringia. It is famous for its ‘thuringer bratwurst’. Falk was recently there and brought some back for the party. Here you can see them being grilled. They really are delicious. They are eaten with mustard and in a bread roll. Here you can see Falk about to bite into one.

Lots of games were played as the sun went down and it got cooler. And so the party guests slowly said their goodbyes and headed home. Like me, all with happy memories of a very special day.