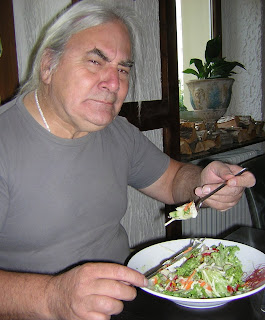 Imre arrived today on his new, smart, 3rd bicycle. This is the one I could happily steal and I make jokes about that. Imre always says there is no way I would be able to steal it. He only brought 2 of his 6 Smartphones with him and only 2 of his 4 cameras! We always make jokes about his collections. 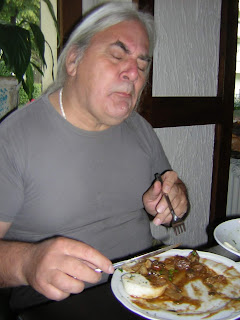 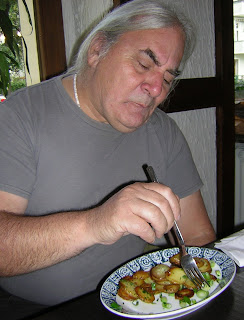 We had talked about a small bicycle tour but due to the cooler weather and my right arm we went to one of my local restaurants. Imre was surprised to see my right arm. It is now about one and a half times thicker than my left arm. The skin is red and burns. He said he would take me to a local hospital but I declined his offer. If it is not better by tomorrow, I told him, then I would go to my doctors.

With that, we went to the restaurant of his choice. It is all of 5 minutes walk away and called ‘The Bömisches Restaurant. It offers a range of Czech, Slovak and German meals. I always go for the former. Imre ordered a large green salad followed by a plate of fried potatoes = no meat. He said it was because he had eaten a lot of meat that week.

I ordered a traditional Slovak meal which includes lots of small pieces of meat cooked with mushrooms. I also ordered a glass of beer from the Czech Republic – tastes great! The food arrived and we tucked in. After a short time I realized I could not eat all on my plate. I told Imre and he said he would finish it off. He did just that, which included more than half of the meat!

As he smacked his lips to finish off my plate, he received a plate of fried potatoes. It did not take long for him to finish these. Then he sighed as he sat back and relaxed. Lots of talk before we paid the bill and returned to my place. We said our goodbyes as I told him he could leave his bicycle with me. He just laughed then got onto his bike and headed home. At least he had enjoyed a good lunch!