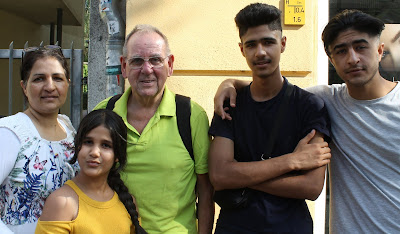 I had a lazy Saturday and a busy Sunday. The latter included meeting The Family for the first time in months. Papa had called me a few times to suggest a meeting. I agreed to meet them outside SB Köpenick station on Sunday at 2.00 pm. Bro1 called to say they would be late. No surprise there!

When they arrived they encircled me to give me a big collective hug with lots of smiles. They all looked well and I noted that Bro2 is now the tallest in the family. We set off to find an ice cream cafe. No luck – all were closed, so we went into a local bakery-cafe. There they relaxed over strawberry cake with cream, coffee, tea, orange and apple juice.

There was a lot of talking as we caught up on news. The children talked about school, exams and homework. I noted their German had improved considerably. The best is still Little Sister. She clearly has a language talent. The boys also told me about the sports clubs they had joined and this had opened up speaking chances with boys of their age. Main topic is football!

Eventually it was time to say our goodbyes. Another nice collective hug before they jumped into a tram to take them home. I walked to the SB to take the train to Rahnsdorf to join in a birthday celebration. A very nice day to start another week.