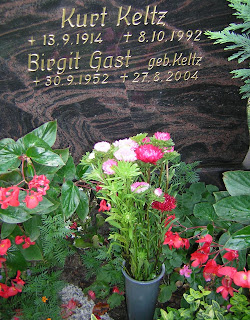 Yesterday was the 15th anniversary of Birgit’s unexpected death. She shares a grave in Lichtenberg with her father. I met her just after I arrived in Berlin and started looking for work.

She was then Head of the Language Department in a large private school in Pankow, which is a district in the north of Berlin.

We  became friends immediately and when she moved to a school on the Kudamn. I moved with her to teach there. Later she found a very nice flat in a family house in my district and so we met more often.

She was always an interesting person to be with. She enjoyed being with people, travelling and meeting people from new cultures and languages.

She died with no warning of ill health or problems. She said she felt tired and went back to bed after breakfast. She had a heart attack and died immediately. A shock to all her family and friends.

I took flowers to her grave on behalf of all, particularly family who do not live in Berlin. As I put the flowers on her grave I wondered what we would have done if she had not died too early. We miss you Birgit!