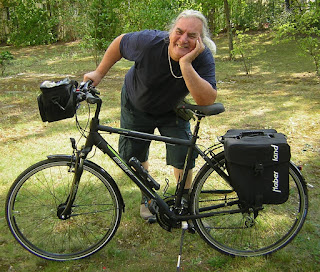 Imre arrived yesterday on his new bicycle. I told you his bike had been stolen from outside his home a couple of months ago. Now the insurance has paid and the company which makes locks has sent him a new one and with an apology. Not bad!

I really like his new bike. It is the new No.3 but then he has 3 of everything be it smartphone, camera or bike. The bike is made by a local family firm and Imre told me all about them as we set off. We took the S-Bahn to Strausberg Stadt to the east of Berlin. The bicycle sections were completely full as others decided to enjoy the weather with a day out. 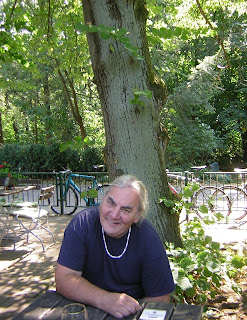 We cycled east along the road and routes we know well. Imre wanted to have lunch at a family restaurant located alone and amid lots of trees. We got there to find a lot of Oldies finishing lunch. The car park was full – no cycling for them! We found a table under a large tree at the front of the restaurant.

I ordered one of the ‘meals of the day’ but could not eat all the meat so I settled for the veg and potatoes. Imre took care of my meat 🙂 He consumed a large salad which he said went well with my meat. Here is a photo of him after lunch sitting under the tree. We then returned to the town and found a seat in a green area full of families with children.

It was nice to see them playing together and splashing in the lake. We ended the tour with Kaffee und Kuchen in my favourite cafe near to the ferry. I have mentioned it before. The owner was there and so switched into English, which he says he has little chance to do and I should visit more often! Then to the station, the S-Bahn and ride home. A nice relaxing day.