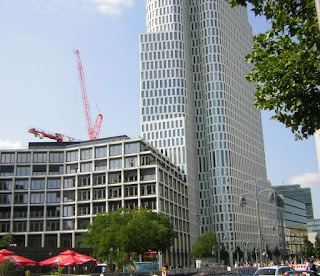 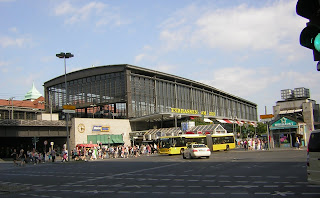 I met most of my Kowalke Gang on Saturday morning. We took the S-Bahn to the station Zoologischer Garten. It is next to a very large zoo, hence the name. Here is a photo of the station. 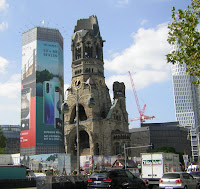 We walked around the corner until we arrived at a cafe and met the rest of the group. There were 10 plus the guide. Our target was to learn about the area – then and now.

Most of the area was destroyed by bombs towards the end of the war. The tower of a church is all that remains of such old buildings. It is called the Gedächtniskirche = memory or commemoration church.
The guide had a large folder of photographs showing buildings as they were. We could then contrast with the buildings that had replaced them.

He also told us about famous shops/stores that operated there and well known people who lived in the area. Our walk ended in the one room remaining of the church. It is at the base of the tower and now full of articles for sale to tourists.