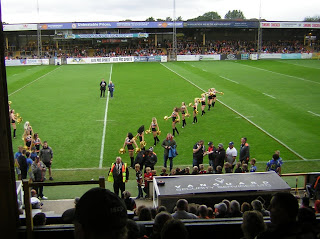 Exactly a week ago I went to a rugby match. Before that there was a family gathering at Alan and Lynne’s home. Nice to see them again including much bigger grandchildren. We went to a pub for liquid refreshment before walking to the rugby ground in Castleford. 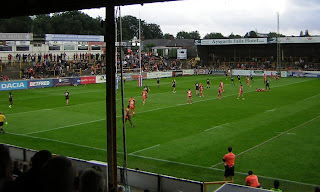 We had booked seats earlier so all we had to do was find our seats. Nearly 6 thousand fans turned up to cheer on their respective teams. The game was between Castleford Tigers and London Broncos. I liked the atmosphere and watching a group of young ladies dancing on the pitch before the game started. They reappeared each time goals were scored. See the photo.

The London team went into the lead early, then a period of activity but no goals.Suddenly the Tigers found their pace and started to score goals. They ended the game with 27 to 8 against the London team. I enjoyed the play and comments made by fans around me – and all in Castleford Yorkshire accent!  A day to remember.