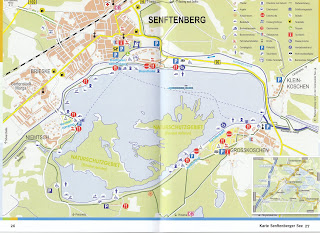 I went to Senftenberg yesterday with Johanna. A very nice day and it was the first time we had been there. Senftenberg is a town of 25,000 people on the southern border of Land Brandenburg. Land means State. To the south is Land Sachsen (Saxony) and the eastern border takes you to Poland.

The town is on the northern border of Lake Senftenberg which is one of many in  the area called the Lausitzer Seenland. German tribes moved into the area from 1200 AD. Before then it was settled by many Slavic speaking peoples and you will find examples of both languages being used including on public notices. 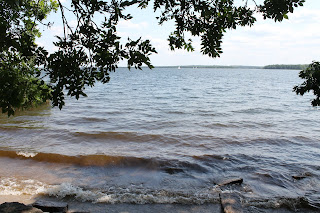 We took a train from Lichtenberg in the east of Berlin. It runs every hour. Nearly two hours later we got out in Senftenberg. The train stops at many small towns and villages en-route. It was soon full of families and lots of people with bicycles. We walked into the centre, found the market square and had a coffee. We then walked to the northern shore of the lake, found the Information Centre, hired two bikes and set off to explore the area. We decided to cycle around the lake and take in the sights.

We had lunch in the ‘Familienpark’ in the village of Grosskoschen. (See the Map) After relaxing there we cycled further and returned the bikes before slowly walking back to the station. Back to Berlin and the end of a very enjoyable day. If you visit Berlin for a few days, think about taking the train to Senftenberg and enjoying the lake and sights.