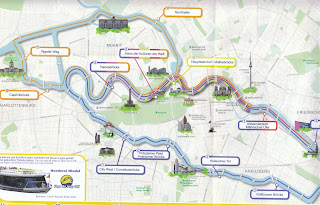 I have been told that Berlin has more bridges than Venice. This morning I went under a bridge which was the only one to survive World War II.  I went under many other bridges after joining my SPD Oldies at 10.00 am. We met at Märkisches Ufer 48, which is opposite the Chinese Embassy and a few minutes walk from SBahn Jannowitz Brücke. 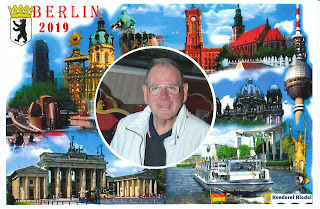 There you will find an embarking and disembarking station for boats. It belongs to Reederei Riedel which must be the biggest tourist boat company in Berlin. You can find them in the internet offering details of their services in a number of languages. I went on such a tour last summer with the SPD Oldies and posted a report on my blog. 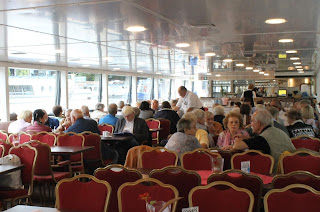 We had booked three tables but I was surprised to see many other Oldies from different groups about to enjoy the sights on a circular tour of the waterways. Of course food and drinks were available and it didn’t take long to order coffee to start us on the tour. Later I went onto the upper deck to experience the cold wind and sights.

A photographer was also on board and took photos of everyone, developed and sold them. Here is a photo of me in a setting of many tourist parts of Berlin. The other picture is of the tour we took on the water. I got it from an information pamphlet available to all. The next time you come to Berlin think about going on such a tour. It is easy to book. Just go to one of many pick-up points on the route and buy a ticket. It’s as easy as that!