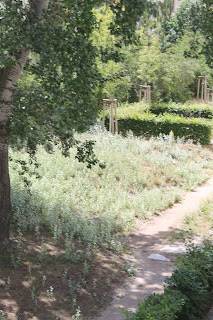 We are having changeable weather at the moment. As I write, the sun is shining and it is 28°C. The gardeners arrived recently and started the once a month clean up in the gardens. Of course, we tenants pay for this in our monthly rent. Here are photos of before and after cutting down all the weeds in the garden under our big tree. The weeds are taking over from the grass because it has been so dry. We really need many days of rain. 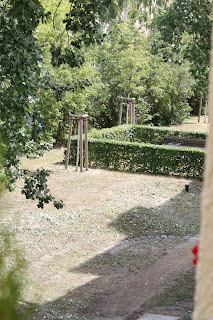 I’ve had a usual week starting with Barbara and German lesson on Monday. That was followed by taking my ancient MacBook to Thorsten. He is our specialist for all matters to do with computers each Monday afternoon. I decided to let him install another operating system called Linux. That took a long time then we discovered we did not have a WLAN connection. He is going to install the programme when he returns from holiday in two weeks.

On Tuesday I met Johanna and we went to a local government office to do some ‘form filling’. I really wonder at the level of bureaucracy here sometimes! Even so, it was nice to see her and spend some time together. I later helped her daughter to translate a text from German to English – which I enjoyed doing.

On Wednesday evening I went to my local SPD Meeting. We had a guest and that was the ex-mayor and now head of three departments in the town hall. She talked about future plans for the district and the current position of the SPD. I found comments by local members to be very interesting.

This morning I met Stefan for a session on how to use a Tablet. The things I still have to learn! Tomorrow is a meeting with my Photoshop Gang for more work on our photos/images. I’ve just returned from a travel agency where I booked some flights. More of that in my next post 🙂