I recently updated a post (4 posts ago) about Imre. I wrote that Imre’s bicycle had been stolen. Here is a photo of him in happier times with the bicycle. He left it in front of where he lives – as usual. Next morning he went out to get on the bike and it was missing. 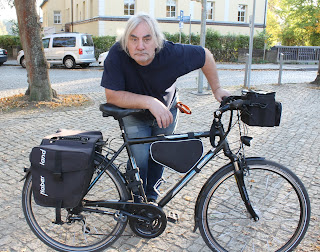 You really have to wonder what is in the head of those who steal bicycles. Why? Is it because they need one or want to sell it to pay for drugs? When my bike was stolen I remember telling friends I would support the return of Middle Age Justice = chop off the hand of the thief!

Weather: I have just read a weather report. It said there is a potentially dangerous heatwave threat next week for all of Europe. Temperatures of 32°C to 40°C. I only had 28°C on my balcony today. The reason given was changes in the Atlantic causing the movement of hot air from Africa. Now fill some extra bottles with water!

Like: I later read a story in The Guardian about the current use of the word ‘LIKE’. It seems to be spreading like a disease. This morning in the tram to my training centre, 2 young men sat behind me. They came from the USA and spoke English. Every third word was ‘LIKE’!