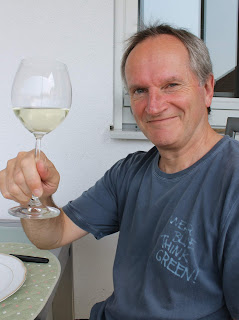 Last Tuesday I jumped into a local S-Bahn and headed east. My destination was Rahnsdorf to meet Harald. He is one of the original members of my ‘Muggelsee Gang’. This takes us back to the early 1990s when I first met them in a retraining course. All have since done very well. A talented gang! I later met his father, a very experienced and talented English teacher. We still keep in touch. 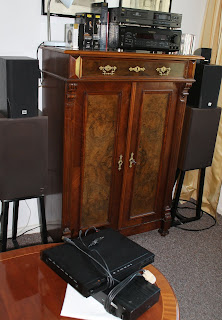 Harald was on holiday and contacted me about a meeting. I readily agreed. He has a really nice, large flat to the east of Berlin and is making changes. One was to reduce two music systems to one. I pricked my ears up at this for part of my system is no longer working. Part of it is about 40 years old so perhaps no surprise that it is slowly falling asleep!

Over lunch, we talked about the equipment and it was agreed that Harald would bring his equipment to my place on Thursday and we would see if the bits were compatible. And so we move to Thursday and his arrival with musical equipment in the boot of his car. We brought them up to my place and had a nice cuppa green tea as we looked at the machines.

We decided to just install them and replace my machines. We did that and discovered that the radio worked as did the CD player via his amplifier. I played a CD of Lorraine Hunt singing Bach and Handel. Wonderful voice! I decided to leave his equipment as installed and later remove my old system. I took a photo. On the table you can see my old equipment and later  I shall remove the big, old speakers you can see supporting the new speakers. I shall share this with you.