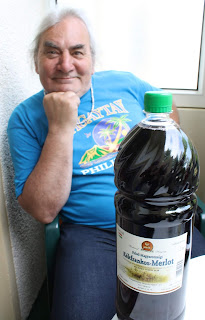 Imre visited this afternoon. We planned a meeting at my place then on a bicycle tour. The weather forecast was not good for the afternoon so we sat on the balcony and waited. Surprise – the sun shone, temperature increased and blue skies. By then Imre had settled into life on the balcony, playing with his cameras, smartphone and tablet.

After more ‘Kaffee und Kuchen’, he contacted his lady in Manila. I got the chance to talk to her for the first time. Her English is very good. By then we had given up on the idea of a bicycle tour and retired to the garden to enjoy the sun.

More talking and taking photos for his lady. I had to take some using his tablet and smartphone which was a relatively new adventure for me.

When he arrived he gave me a gift. He was recently in Hungary so bought me a large bottle of Merlot. Very nice of him given that he does not drink alcohol. Many thanks Imre!

UPDATE: Someone stole Imre’s Bicycle No 3 yesterday. It is the second time one of his bikes has been stolen. He has reported it to the police and his insurance. Even so, it is a shock to find your bicycle has been stolen. It happened to me a few years ago.