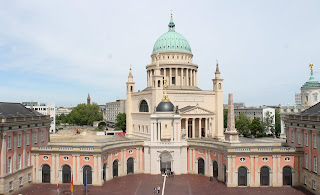 I went to Potsdam yesterday. The reason was to visit Dr. Peter von Long-Legs. We planned a meeting some time ago which illness stopped. I took the regional train from Alexander Platz and enjoyed seeing the sights en route. As usual, most people in the train spent the journey staring at their smartphones!

In Potsdam we met in the main station and went for a coffee while we caught up on news. Peter wanted to meet in town and not at the university where he lectures. I could understand that he needed a break from his workplace and the old town centre has some nice sights and buildings. 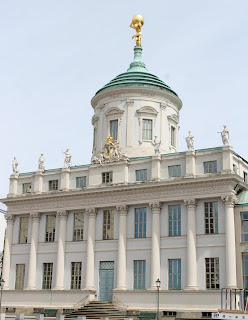 Potsdam is the city in Land Brandenburg where the government and members of Brandenburg parliament sit. The parliament building is part of an old complex still being rebuilt or repaired in the centre of the city. Towards the end of WWII, there was a very big bombing raid on the city which destroyed much of the centre. The new buildings were of the 1960s ‘box’ style which do not sit too well with the old architecture.

We went into the parliament building for a walk around. I took a photo looking towards the old cathedral and other ‘non-box’ style buildings. You can see it here. We then took our time wandering around the centre until we came to the main pedestrian shopping area. Peter likes an Italian restaurant there and so we settled down for lunch and more catching up on news. This time I did not eat asparagus. I settled for a pasta dish with a very nice glass of beer.

A slow walk back to the station followed, then goodbyes before I settled into another regional train to take me back to Berlin. A very relaxed day with a talented academic. Thanks Peter!