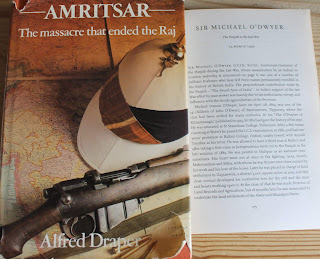 Today is the 100th anniversary of the Jallianwala Bagh Massacre in Amritsar, which is now the capital of the state of Punjab in the north of India. If you have seen the film ‘Gandhi’ you will remember it is shown in all its horror in the middle of the film.  Jallianwala Bagh is a large walled garden not far from The Golden Temple. Many people gathered there to listen to speeches demanding independence, which was against a new order banning such meetings.

On the orders of Sir. Michael O’Dwyer, Lieutenant Governor of Punjab 1912 – 1919, Brigadier-General Dyer GOC Amritsar marched his troops to the entrance of the Bagh and opened fire. They shot into the crowd for 10 minutes. That was when they ran out of bullets and so stopped firing! The Bagh is now a memorial and I am sure many people will be there today to remember the victims.

I first went there in 1976 and had to use another surname. My hosts considered it too dangerous to use my family name in public. Dyer died in 1927 and Sir Michael was assassinated by Udham Singh in his home on 13th March 1940. He was 75 years old.