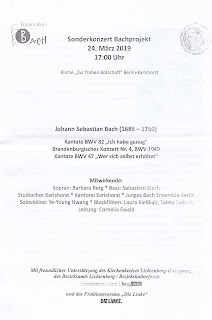 I had a quiet Saturday, mainly shopping, reading and homework. I completed all the exercises in my grammar book. Tomorrow I start a new exercise book. On Sunday I had a visitor. Yes, Imre arrived for a chat and ‘Kaffee und Kuchen’.

The weather was fine and even sunny early afternoon. Imre brought a large plum tart with him, so all I had to do was make the coffee. As he tucked in, he brought me up-to-date with events in his life. We even agreed on some targets for bicycle rides when the weather gets warmer.

Later, he cycled home and I walked down the road to the local Protestant Church to meet my ‘Kowalke Gang’ for a Bach concert. They were already seated as I arrived just before the start. This church is well known for promoting music and hosting concerts. It was full and no surprise to note that most were ‘Oldies’! The performers were superb and deserved the applause.

Back home I settled down to watch a football (Fussball) match. It was for a place in the European Championship. Germany against The Netherlands. Germany won 3:2 due to a last minute goal. The German team manager had made some changes to the team. Replaced 3 players with 3 new and younger players. I thought the Netherlands team played much better, attacked more and acted as a team. The German team won due to quick runs by forward players. Some of the TV commentators shared my view. Now to get ready for the day.