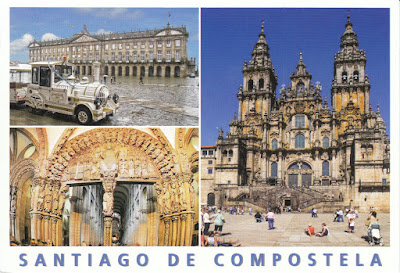 It is International Women’s Day. Congratulations to half the population of the world! I hope you are celebrating and will continue to promote women’s rights in the next twelve months. I joined four SPD members yesterday near the S-Bahn station at 4.00 pm. The SPD has a tradition of celebrating Women’s Day by handing out red roses to women, young or old! I really like taking part and seeing the pleasure on so many faces as they accept a rose – or two.

I recently got this postcard from Heike who lives in Brandenburg but likes to explore the globe. This time she was on a ship for a two week cruise starting at Palma de Mallorca and ending in Hamburg. She sent me a card from Santiago de Compostela. It is the capital of a district in northwestern Spain. 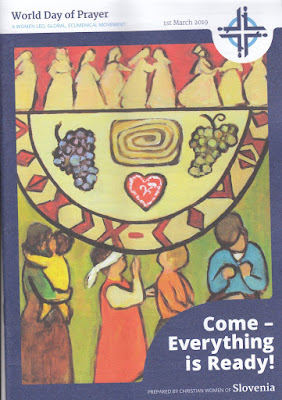 Its origin is the site of the shrine of St. James, which is now in the cathedral you can see on the right of the card. Many people walk there for it is the end destination of the ‘Way of St. James’, which has been a catholic pilgrimage route since the 9th Century. In 1985, the ‘Old Town’ was designated a UNESCO World Heritage Site. So, the next time you are in the northwest of Spain, and have nothing to do, then pack a rucksack and set off on the walk across the top of Spain until you reach Santiago! I am sure there are groups of women doing this as I write.

The other image is of a booklet sent by Alan and Lynne who live in Castleford but also like to visit family and friends in other parts of the globe. They are both very active in their local Baptist church and in a number of social groups that help people with different problems. Lynne also plays the piano at the church and gives Sunday Sermons. Her theme last Sunday was ‘Listening’. An interesting topic.

On Friday 1. March they went to Allerton-Bywater church in the north of Castleford to take part in the World Day of Prayer Service prepared by Christian Women of Slovenia. Amazing! The booklet is full of information about this group of women, about Slovenia, and it formed the basis of the church service. Now this really is about building bridges across borders and links to other women – and not only on International Women’s Day.

I should be in Potsdam and not writing this text. Barbara (my German teacher) organised a small group to travel there but this morning she called us to cancel. She had picked up warnings about bad weather and high winds. As happened recently, this blew down trees and branches which blocked road and rail transport. We decided to postpone the visit. Now I can have a doze after lunch!