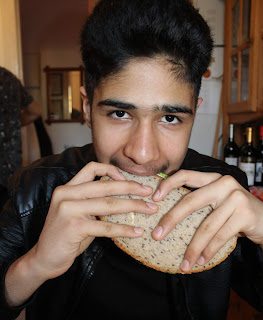 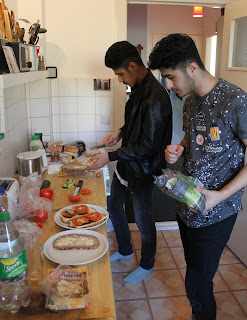 Yesterday afternoon ‘The Bros’ arrived but this time 30 minutes early. Wow – but that has never happened before. They asked to visit to do some work on the computer and some more ‘chillen’. Bro1 opened the laptop and started looking for names and addresses of companies offering training courses to young people in the final year of school. He had assembled a number of companies before he arrived so added a lot of new ones to his list. 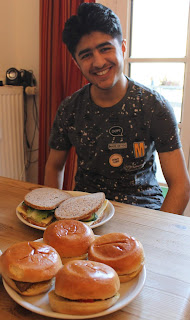 Meanwhile, Bro2 opened his English Grammar Exercise Book and started work on that. After an hour the expected cry of, ‘Grandpa, I am hungry.’ was heard nice and loud. I had earlier told them they had to select what to eat and they did just that in my local supermarket. This time no Pizzas. On returning they took over my kitchen. I just sat in a corner and smiled.

They produced a large green salad, big sandwiches, and burgers which they cooked themselves. This was washed down with water, fruit juice, cola and sprite. I still sat and smiled as I watched all this take place and then wonder where they put all the food as they munched away. Later Bro1 said

he was tired so I told him to doze on my bed. As he dozed, I got into another conversation with Bro2. It covered many topics and I noted how he jumped from one topic to the next without any apparent connection. One started with his question, “Grandpa, what does democracy mean?”

‘Answers on a postcard to’ …… !! More work on the laptop followed and more English homework. I noted how they had both accepted that improving their English was to do with post-school life and work rather than passing a test at school. Some progress there! The took some of the food with them to share with other members of the family and so ended a very interesting time. I look forward to the next visit for I never know what will happen when they open the door 🙂