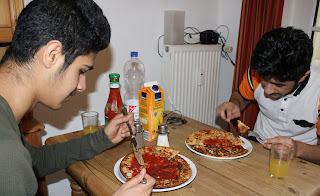 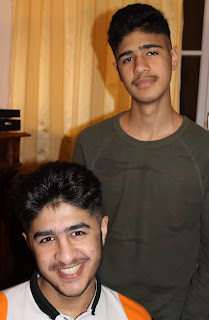 I woke late on Sunday and slowly emerged into the day. I made a salad and did some paperwork, then I heard the bell ring. It was 2.10 pm and The Bros/Boyz  arrived. I was surprised that they were only 10 minutes late. Timekeeping is improving! We sat around the table, drank tea and fruit juice and just talked.

I raised something in the news. It was another set of killings in Afghanistan and Middle East countries and all in the name of Islam. That really got The Boyz talking. It developed into a heated discussion which I ended by congratulating them on being to talk about such killings. They are old enough to have an opinion and feel free to voice it. A central tenet of democracy and Free Speech. 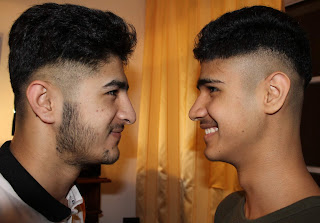 Then I heard the words I was waiting for. “Opa John, I am hungry!’ I put the salad onto the table and pushed the pizzas into the oven. They made short work of the salad and ten minutes later sank their teeth into the pizzas. I always smile when they eat pizza for they smother it/them in tomato ketchup. You can see that in the photo here.

Later they went through my DVD collection and found 20 they want to look at in future visits. Given our earlier discussion I suggested they watch a film called, Lawrence of Arabia. At different points they stopped the film to ask about men who later became kings and about the countries formed when the Ottoman Empire ended in 1918/19. It was like taking them on a visual history lesson but they found the film interesting and said they learnt a lot.

It was then ‘Haircut-Time’ The Boyz cut each others hair. Lots of directions to do ‘A’ and not ‘B’ and they emerged with a style which is now common in Berlin – for the below 30s! Then Bro2 said it was my turn and I let him give me a similar cut. To do so we ignored the 30’s age rule! More snacks and drinks before they put on their warm winter coats and said goodbye. An interesting visit.