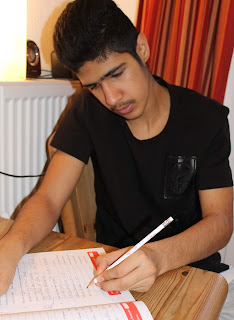 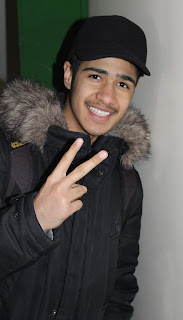 Last week I got a call. It was from Bro2. He asked to visit me on Sunday afternoon. I agreed then asked if there was a special reason or need, such a homework. He said no special reason, just wanted to see me and “chillen”. That made me smile. It is modern, young German ‘Denglish’ meaning to chill out = relax.

He duly arrived, as you can see in the photo, wearing appropriate clothes against the cold weather. The usual settling in based on what he wanted to drink and/or have a snack. While doing this he told me about his latest school report. He got it last Friday. This week is a school holiday. He proudly told me he had got a 2 for German and English. This led to a longer conversation. 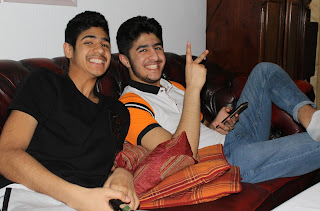 It took us into looking into his future after school. I told him he would be up against competition for a job, or a place to study, and that the competition would probably have better English. He listened intensely. I added that he needed to improve his English to work outside Germany.  I said that he should start now to improve his English and use the books I had. He then nodded his head and said he agreed and could we start now. I gave him a low level grammar practice book, with an answers section, and off he went.

He then said he was hungry. No surprise there! I had already prepared some food for when I heard those words. I warmed it and he had a double helping. Just then his mobile rang. It was Bro1 asking if he could join us. Of course I said yes and so later the bell rang and in he came. He also said he was hungry. Fortunately I had held back some of the food so he got a full plate. Happy faces from both, then they asked if they could watch a DVD. They selected one and settled onto the sofa for a period of ‘chillen’. Here you can see them ‘chillen’. I always enjoy their visits. They make me smile 🙂