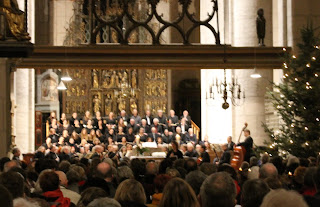 In my last post I told you I was going to a concert in Bernau. I met two nice ladies and off we went. We arrived at the St. Marienkirche near to the market place in Bernau. We found seats near the front and settled down, We heard J.S.Bach’s Weihnachts(Christmas)Oratorium – Kantaten 4-6. It was wonderful to relax and let the music and voices fill the building. 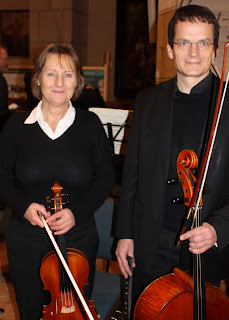 I later wondered about the history of Bach, and the difference between Kantaten and Oratorium. Here is what I found – in a short form! There are 209 surviving cantatas written by Bach, There are more but it is not certain he wrote them. The earliest dates from 1707. Later he was appointed director of church music in Leipzig, in 1723, and it was there that he composed most. The last was written in 1745 and he usually wrote one a week. Busy Boy!!

Most cantatas were written for 4 soloists and four-part choir, within 6 structures including narrative. What is the relationship between the two? The answer is that his oratorios are expanded cantatas. His six-part Christmas-Oratorio was intended to be performed on six feast days of the Christmas season. Each part was composed as a cantata with an opening chorus and a closing chorale. Of the six, we heard 4,5 and 6.

At the end I was able to take a few photos of Angelika who plays viola. Here is one with a musician she has played with in quartets for many years. I have met him on many such occasions, mainly in summer concerts. A really nice evening and a perfect way to approach the end of a year.