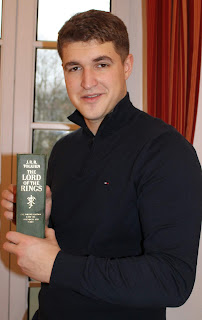 I went to my usual Friday morning meeting with Kerstin and the ‘Keep-Fit-Oldies’. I enjoyed all the movements and training and listening to other Oldies speaking in ‘Berlinisch’. I arrived home just after noon and waited for the doorbell to ring.

The first was Daniel. I haven’t seen him since he started studying Economics at Berlin Humboldt University last October. It was nice to see him again and looking very well. I thought he had grown even more but he said not and that I was shrinking with age 🙁 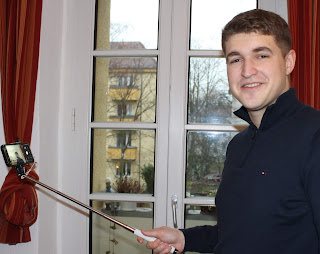 Over ‘Kaffee und Kuchen’ he told me about life as a student at the university. He is studying for a BSc. over three years and already has plans for work after he graduates. Yes, you guessed correctly. He wants to move to Moscow and work there. No surprise given his Russian language skills.

Meanwhile, he is looking for money to buy a course book about economics written in English. I am still wondering why in English! I decided to give him a copy of The Lord of the Rings in one volume. If he can get through that then he deserves a medal. Watching the films is easier that reading the book, but then I did that years ago before the films were made. 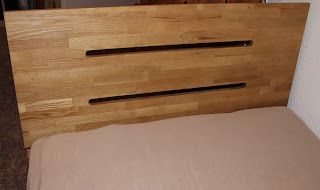 His grandparents bought him a nice Christmas present. It is a Samsung smartphone. Daniel added a rod to it – I don’t know the real name of such a thing – so he could take ‘selfies’ and send to family and friends. He told me my camera was out of date and I could throw it in the bin! There is such a thing as quality, even with cameras and photos, so I think I shall not throw it into a bin!

Then the doorbell rang again. It was the man from the bed company. If you remember I posted about getting a new bed, but the ‘bedhead’ was broken. A new one was ordered and installed today. Here you can see where I shall lay my head this evening and read a book until I nod off. Looking forward to that. Before then I shall turn on my TV to watch a football match between two German teams. Bayern is not playing but I shall still enjoy the match. Enjoy your evening!