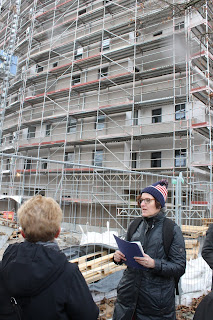 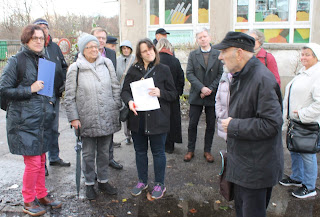 Yesterday morning I went on a walk. I can hear some of you saying, “Na, und -what’s special about that?” I went to the next area of the district where I live. It is called Friedrichsfelde. There are six such areas making up the district called Lichtenberg. My area is in the south. 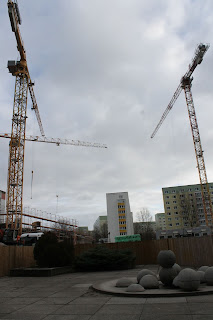 The local SPD had prepared a walk through the area to show the interested public what new buildings were under construction and what was planned. My district is run by a political party called die Linke. It is the successor of the old DDR ruling party. The SPD is the second party in the local parliament and the deputy Mayor is called Birgit M. who is also the leader of the local SPD. She had organised the walk. 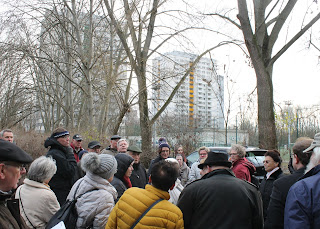 There is a growing demand for affordable flats all over Berlin now. The investment companies stepped in some time ago and rents increased. Many people could not pay so left – are are sill leaving –  the central districts for areas like mine. Local governments are under growing pressure to build more blocks of flats, local schools and local facilities. That was the background to the walk yesterday.

I was surprised at how many local people turned up and took part in the walk and discussions. I also noted that many of them were ‘Oldies’! I had been asked by my local party head if I would attend and take photos. I agreed and took 14 photos which I have now forwarded for local distribution.

Here are a few for you to see something of local politics in Berlin which does not appear in your national or international news radio – TV programmes!