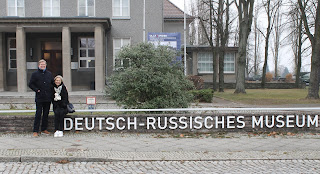 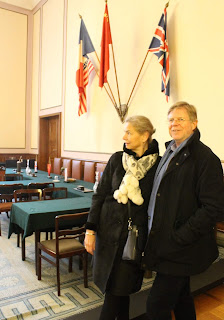 Yesterday was a really special day for me. I told you in my last post that I was expecting visitors. They were Jeff and his wife Ike. I met Jeff many years ago when he registered at Sussex Uni for his doctorate He comes from California, fell in love with a lady from The Netherlands and went to live in Amersfort. He re-married a few years ago and it was my first meeting with Ike. Speaks perfect English in addition to German and Dutch. 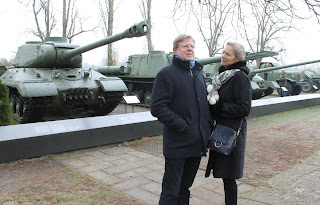 They arrived after breakfast and we soon started to catch up on news over coffee, tea and biscuits. They told me they had seen all the standard tourist sites in the centre of the city on Friday so were happy to go to other places. Off we went to the German-Russia Museum. I have posted about this before and regret that not many tourists know about it or visit the building. It was completed in 1937 as an Officers Mess in a complex designed for training officers for the then German military. 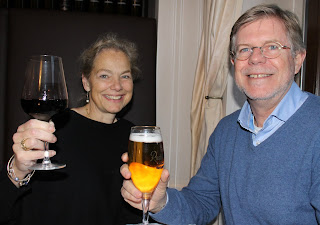 The complex was not destroyed by bombing so the Soviet military took it over. On the evening of the 8th May 1945, a number of senior military officers met in the large hall to sign a document for the unconditional surrender of German military forces, and so ended WWII. Jeff and Ike were very impressed with the museum presentation and said they were very glad to have seen it. Here you can see them in the hall where the signing took place.

We had a late lunch with more catching up on news and then to the S-Bahn for the short ride to Friedrichshagen in the east. We walked down Böttcherstrasse, which is full of interesting small shops, and reached Muggelsee, which is the largest lake in Berlin. By then it was dark, but they were happy to have taken the trip there, and said they would like to see it in summer. We then found a place to sip a glass of red wine/beer before taking the return trip.

They are now on the way to Tegel Airport for the flight back to Amsterdam. Looking forward to Spring and showing them more of Berlin. Hope you had a happy day and re now relaxing.