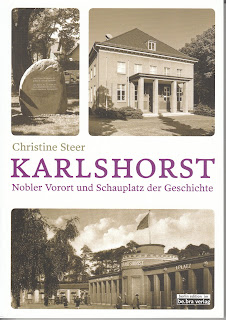 I bought a book today, after my movement and stretching course led by Kerstin. Last Wednesday afternoon I attended a meeting of the local museum support group. An ex-mayor was also present and recommended we all read a new book about the history of Karlshorst. He was a history teacher and has written a book about the SPD in Karlshorst. I decided to follow his advice.

Here you can see the title page. I would translate the words as, ‘Noble Suburb and Site of History’. In the top right you can see the entrance to a large building. This was to host a very important event and one which put Karlshorst into world history. 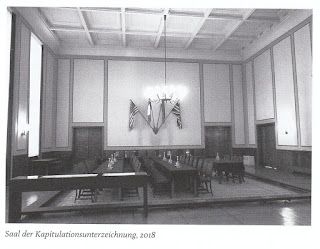 Karlshorst translates as ‘Karl’s Nest’ and is in the south of the borough of Lichtenberg in the east of Berlin. It was founded in 1895 as ‘Carlshorst’. It was planned to be the garden town of Lichtenberg for only 500 families. It now has a population of 22 thousand! In 1901, a station was completed for the S-Bahn and trains from Berlin to Breslau (now Wroclaw in the west of Poland). It then developed as an affluent residential area.

In the mid-1930s, a large complex was built to train officers for the Wehrmacht. In the south of the complex an Officer’s Mess was built with sleeping and dining facilities. Marshal Georgy Zhukov established his HQ there in April 1945. In the evening of 8th May 1945, senior military officers from different countries met there, including three representing the German military. They signed a document containing the unconditional surrender of German forces, which officially ended WWII in Europe. Here you can see the hall where the signing took place.

From 1945 to 1949, the buildings served as the HQ of the Soviet Military Administration in Germany. Russian soldiers left Karlshorst in 1994. It is now the home of the German-Russian Museum. Entrance is free! Pay a visit the next time you are in Berlin. It is worth it.