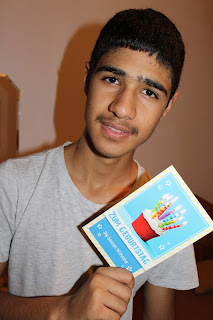 So, who had a birthday nearly two weeks ago? Okay, I’ll make it easier for you. It was a ‘he’ and he was all of 16 on that day. I think some of you have got it right. It was Bro2 from my Family. He called earlier and wanted to visit just after his birthday. We agreed a day/time then he had something at school so we agreed another day and time – and then another one! 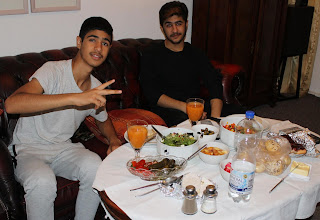 We finally met two days ago. He arrived with Bro1. Really nice to see them again after nearly 4 weeks. After our greetings, I gave Birthday Boy a card with a present inside. He was both surprised and very happy. I think you can see this in the photo. You may also notice that his moustache is clear to see.

Bro1 now has a full beard. Very nice and it suits him. Bro2 complained that he couldn’t grow a beard but proudly showed me 4 hairs growing under his lower lip. I  told him to leave them alone and be patient. The beard just needs a bit more time. He smiled at hearing the words he wanted to hear 🙂

I put food onto the table in front of the TV and they settled down to an evening of eating and watching a James Bond film on DVD. I noticed they chewed more and harder in the chase and fighting scenes! And so the evening went by and it was time for them to leave. A really pleasant time with lots of smiles, laughs and jokes. Looking forward to their next visit. I wonder what Bro2 will buy with the present I gave him?