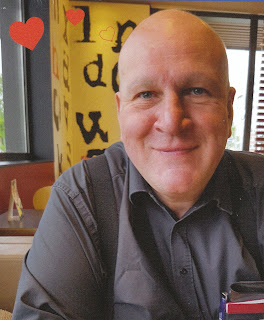 Die Beerdigung means a funeral in English. I went to one this morning. It was for Andreas who died nearly a month ago. He was only 50 and died peacefully in his sleep. I was told his heart just stopped. Still a shock for someone so relatively young.

I got to know him via the local SPD. He joined when he was 18 and had clear opinions, even when other members were not too happy with his views! He was very much his own person. He also owned a local bar-restaurant for many years. He recently sold it and moved into a nice large flat with his wife.

I think I told you that I met her recently and produced a photo of Andreas in a frame. This was on show this morning at his funeral service. I had to smile as I saw many people take photos of it surrounded by flowers. The chapel was full and the speech about his life was interesting. There was not a religious service for he was an atheist.

We shall miss you Andreas at future meetings and waiting to hear your views. It was a pleasure to know you and talk to you.