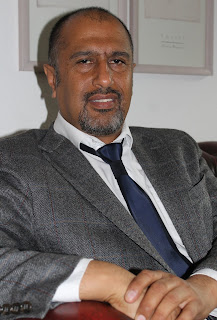 I had the pleasure of welcoming Father and Son(2) to my place this week. I got a call from Papa and we agreed to meet on Monday morning. He wanted new photographs to send to family and friends. Why? Look closely and you can see that he is now sporting a moustache and ‘chin’ beard.

He said that both sons had told him to grow a beard and he finally gave in but not a full face beard. I told him the boys had also said their ‘Opa’ should also grow a beard but I told them I only had grey/white hair now and looked like Santa Claus’ grandfather! No way. 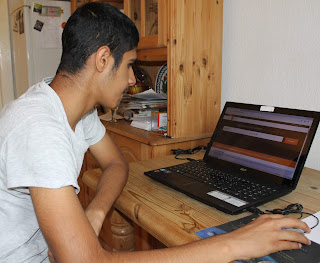 It was nice to sip a cup of tea with Papa and catch up on news. I took a range of photos with and without a tie and jacket. Difficult to choose which one to share but I think this one may be the best.

Two days later Son(2) rang the bell and came for a visit. He needed help. He had a document from his school about a ‘Praktikum’. This is period when students get work experience to help them choose a job when they leave school.

As I have told you before, the family does not have internet or TV where they live and so Son(2) came to me to use my system. He went onto the internet and we quickly found a number of companies offering the kind of training he was interested in. Then we had to contact each company via e-mail. That was when the problems started.

He uses Gmail but in Persian. He had lots of problems to reformat so he could write his applications. I printed out his work and we noticed it was a mix of the two languages and layouts. We still sent them out and hope he will be successful in finding a suitable Praktikum place. Nice to see him again and note how easily he used the computer 🙂