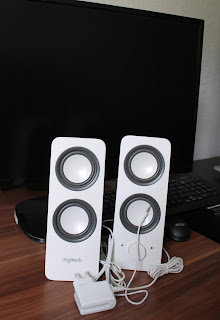 I told you I had problems with my old speakers on my new computer. Last Friday I went into a local electrical shop and looked at a range of speakers. I was surprised at the price range. I took my time to look at all on offer within my budget then asked an assistant for advice. He agreed with my choice so I bought them. You can see them here in front of the computer.

Daniel arrived on Saturday morning. He helped to replace some runners on curtains. Next visit he will bring a drill and new curtain rail. The one in the kitchen needs to be replaced. After that we discussed a plan for our next meetings to prepare him for the FCE examination. I then gave him a set of grammar tests. He got 95% correct! Remember that English is his fifth language. 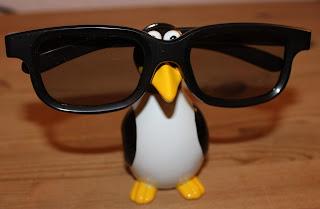 I did some shopping after he left then decided to tidy away some things as we say goodbye to summer. I wondered where to store my sunglasses when I heard a squeaky voice. It was Percy the Penguin. He flipped the glasses onto his nose, said he would look after them over winter and jumped off the balcony. See you next Spring, Percy!

Early Sunday afternoon I had visitors, Yes, the ‘Boyz’ arrived. They just wanted to ‘chill out’ and watch a DVD on my system. First they helped me to switch computers on my desk. Not easy with so many wires and connections but they did it all in five minutes. Reward was coffee and slices of fruit cake. They found a film they wanted to see and settled down. 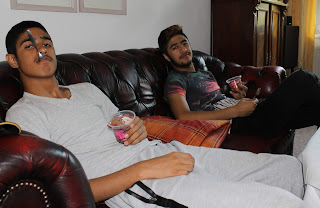 Meanwhile I prepared some food in the kitchen and made sure they had enough fruit juice and water to go with the meal. After a break for the meal, they returned to the film and chocolate pudding. Here you can see a shot of them enjoying the pudding. The film was in English and Bro2 kept stopping it in order to ask me what some words meant.

One was, ‘What is the difference between hug and cuddle’ I explained but noted they did not understand so I got Bro2 to stand up and I gave him both. Then he said, “Now I understand!” with a big smile on his face and gave me a cuddle 🙂

After the film we just chatted. Mainly about school and careers. We also talked about the latest political situation. You probably know about the recent demonstrations and rise of the political right wing. The Boyz said they knew about this. And so it came time to say goodbye. They left with crisps and bananas in case they felt hungry on the way. As we moved to the door they turned and said,” A cuddle please.”They learn quickly!