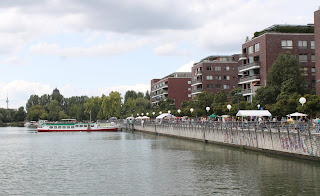 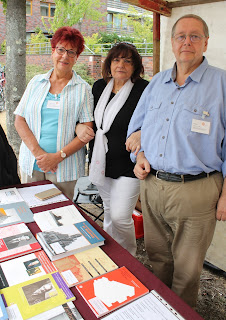 I left the Fire Brigade Party and took the S-Bahn to Rummelsburg. It is two stops away and a sub-district located on the River Spree, which flows through Berlin. There is a nice promenade on the side of the river called the Rummelsburger Bucht (bay or cove in English). You can see this in the photograph above. And there I went to enjoy the annual Water Festival. 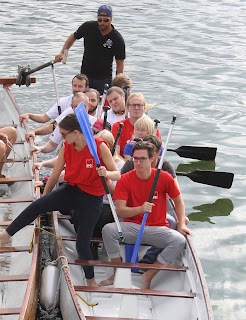 There were lots of stalls from local organisations plus some selling grilled sausages but only one selling beer. There was always a queue there :-)) The local museum had a stall and I had registered to help them. I did just that for a couple of hours. Here is a photo of the stall with the lady in the middle who heads the museum support group. 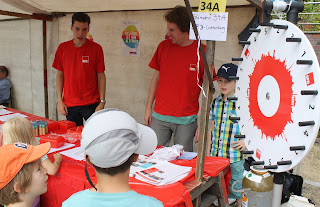 From there I went to the SPD stand which was next to the museum stall. There I helped out. This included helping children to turn the wheel you can see in the photo. There were three win points all marked by ‘SPD’ in red. The kids turned the wheel and did not notice that as it slowed I stopped it on one of the red ‘SPD’ win points. The kids all won prizes and were really happy. Some parents noticed that I was cheating for the kids but said nothing. They just smiled!

From there I walked to some boats with a group of SPD members who climbed into one. There were other teams and all raced across the bay. We did not win but all had a great time and enjoyed the event. In the photo you can see some of the SPD rowers leaving the boat. A really happy event with sunny weather and lots of families with smiling children. A great way to spend an afternoon.