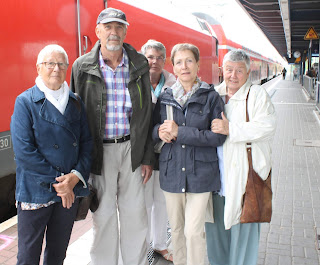 I met my Kowalke Gang last Sunday at Ostbahnhof (East railway station.) We jumped onto the RE1 train for just over an hours railway journey to Stadt Brandenburg. Nice to see all again and catch up on news. 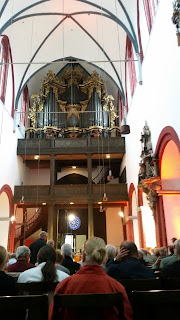 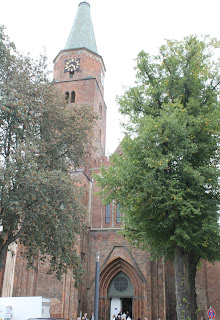 We decided to walk to the central area to the Dom (The Cathedral). The weather was pleasant as we slowly marched towards our goal. Near the island area on which the Dom was built 700 years ago, we stopped at a restaurant. We had booked a table earlier so sat in a corner with a clear view onto a river/bay.

Most of us ordered fish for the area is well known for the variety of fish and ways of cooking them. I enjoyed mine with a cool glass of white wine before we started again on our journey. We arrived at the Dom and got our tickets for the last summer concert there.

We entered the cathedral and founds seats at the back. The concert was three pieces of music written by Franz Schubert. The concert was sold out and most of the audience were over 60! It started with Symphony No. 4 followed by his Magnificat and ended with his Stabat Mater.

The music was played by the Brandenburger Symphoniker and the choir was the Brandenburger Kantatenkreis. We settled into the concert and then all suddenly paid attention to the soprano. A truly individual voice. Strong and effortlessly moved up and down the musical scale as well as loud to soft and with no strain or effort in her voice.

I was surprised that I had not heard of her before. Her name is Eva Friedrich and if you ever have the chance to listen to her sing then rush out and buy a ticket. I do no know why she is not known around the world!

We slowly walked back to the station and the train to Berlin. We all talked about how good the concert was and the soprano. A really enjoyable day to mark the end of summer.