I went to a Grillfest this afternoon. It was at the Community Centre fir Seniors where I go every Friday afternoon to meet my Photoshop Gang and Stefan. He is now the Boss of the centre in addition to leading the Friday class.

There are no regular Friday meetings at the moment = summer holidays. But Stefan is busy organising a number of social meetings and exhibitions Today was our Summer Grillfest and I registered. The weather supported the event although cooler than of late.

The Oldies settled into the main room and enjoyed a round of coffee and cakes. Lots of talking and music by two men who played and sang songs in Greek. Later they played Greek music as some of the Oldies gently moved their feet and bodies. They danced. 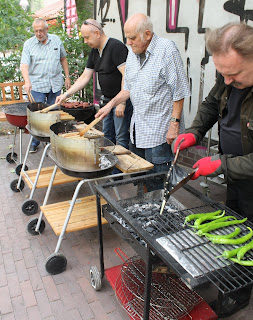 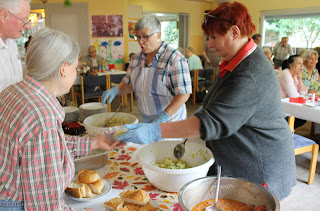 As the clock ticked away the announcement was made that ‘Grillen’ was ready. The Oldies formed a line and shuffled into the garden where some men were grilling sausages and different kinds of meat. Nothing was produced from pork. I think the sausages were made from turkey meat. From the grill area they went back into the main room and added potato salad and green salad to their plates. No alcohol drinks were served so it was all washed down with water or fruit juices.

The musicians had a break and returned to play more dance tunes as the Oldies came to their feet again to move to the music and burn off a few calories. I really enjoyed the atmosphere and spent longer there than planned. My Friday afternoon sessions start there in a couple of weeks and I am looking forward to meeting my Photoshop Gang again and listening to what they did during the summer holiday.