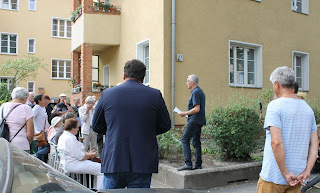 I went to a special memorial meeting yesterday afternoon. It was outside a house three streets from where I live. There were speeches by various people, including the local mayor and director of the local museum. The event ended with the unveiling of a commemorative plaque (Erinnerungstafel).

The people being remembered were Hildegard and Erwin Marcusson who lived in that house from 1959 until Hildegard’s death in 1992. Both were medical doctors and on their return to Berlin in 1946 became active in creating medical services and facilities in factories. After the founding of the DDR in 1949, they were active in expanding the medical system to incorporate further education for medical staff particularly for childcare.

They met in 1921 when they joined the newly formed communist party. Both came from Jewish families and escaped to the UdSSR when the Nazis were elected to power in 1933. They did not have an easy time there, as Stalin consolidated his power, and were exiled to Kasachstan. They left in 1946 and started new medical careers in Berlin.

I didn’t know about them before. Such events are organised by the local museum and staff. The couple who live in that house now are very good friends of mine. What a coincidence.